Pre-employment tests are an objective, standardized way of gathering data on candidates during the hiring process. All professionally developed, well-validated pre-employment tests have one thing in common: they are an efficient and reliable means of gaining insights into the capabilities and traits of prospective employees. Depending on the type of test being used, pre-employment assessments can provide relevant information on a job applicant's ability to perform in the workplace.

Pre-employment tests have become increasingly popular in recent years as a way to filter and manage large applicant pools. The Internet has made it easier than ever for job-seekers to apply for jobs– one study estimates that, on average, a whopping 250 resumes are submitted for every corporate job opening. Some job-seekers, known as "resume spammers," distribute their resumes across the web in blasts, with little regard to required qualifications or job fit. With applicants spending just an average of 76 seconds reading each job description, it is unsurprising that recruiters report that over 50% of job applicants do not meet the basic qualifications of the job. As a result, most hiring managers don't have the bandwidth to thoroughly review every candidate's application, with recruiters reportedly spending an average of just 6.25 seconds reading each resume.

In this environment, pre-employment tests can provide tremendous value for organizations seeking to find the right talent. By adding pre-employment assessments to the candidate selection process, companies of all sizes can get a better handle on the vast pool of candidates applying to open positions. And while technology may be responsible for the increase in applications, it also provides an answer, by making it much simpler to integrate pre-employment testing into the hiring process.

There are many different types of pre-employment tests, but they generally fall into three categories: aptitude, personality, and skills tests.

Aptitude tests measure critical thinking, problem solving, and the ability to learn, digest and apply new information. In essence, cognitive aptitude tests seek to assess an applicant's general intelligence or brainpower. According to one study, 70% of employers looked for candidates with problem-solving skills, and 63% looked for candidates with analytical skills. These abilities are difficult to assess based solely on resumes and interviews, and that is where aptitude tests can help. Aptitude tests can be used in almost any occupational context, but they are especially useful for mid- and higher-level jobs. Because they test the abilities that are most essential to job performance in a wide variety of fields, it's no surprise that aptitude is the single most accurate predictor of job performance.

Personality tests seek to answer the questions: Will the candidate be comfortable in this role? Does the candidate have the behavioral traits that are linked to success in this position? Unlike with aptitude tests, there are no right or wrong answers on personality tests. Instead, these tests measure the extent to which people possess relatively permanent behavioral traits. Measuring these traits can help employers predict job fit by determining if a candidate's behavioral tendencies are a good match for both the position and the company culture.

Personality tests can measure many different traits, but the most prominent personality test framework uses what is called the "Big Five" or "Five Factor Model." These are the five dimensions of personality that consistently emerge in empirical research: Agreeableness, Conscientiousness, Extroversion, Openness (to Experience), and Stress Tolerance. The concept of personality "traits" is now fairly widely accepted, and is superseding an older paradigm of personality "types" that originated with Carl Jung and relied on a view of personality that categorized people into one of two distinct types, such as introvert or extrovert, thinker or feeler, Type A or Type B. The traits model is gaining credence in personality research because of growing evidence suggesting that a strict dichotomy between two distinct types does not sufficiently describe the nuances of human personality. 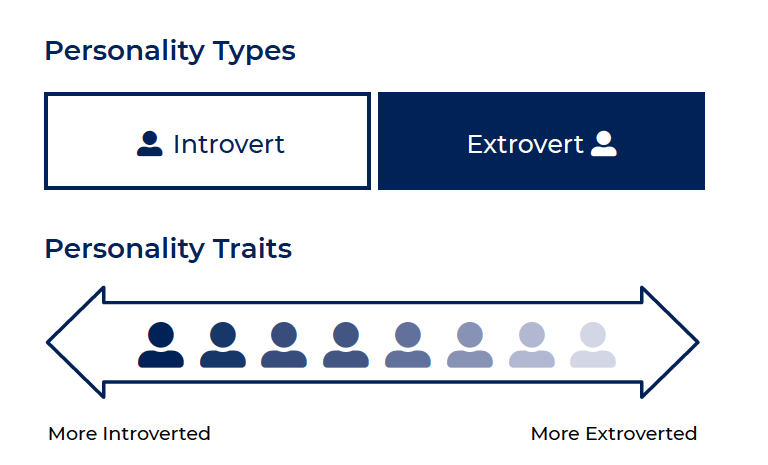 Figure 2: The traits model is gaining credence in personality research because of growing evidence suggesting that a strict dichotomy between two distinct types does not sufficiently describe the nuances of human personality.

The Big Five traits are especially applicable to the hiring process because substantial evidence links these traits to job performance for a variety of positions. Conscientiousness, which measures the extent to which an individual is reliable, organized, persistent, and responsible (those who score low in Conscientiousness may be more impulsive and at times unreliable) has been shown to be moderately predictive of success across many job types, but particularly for entry-level positions where characteristics like reliability and punctuality may be more valuable than creativity.

Research demonstrates that certain personality traits are particularly predictive of job performance for two types of positions – sales and customer service jobs. Generally, the highest performing salespeople across a wide range of industries tend to be competitive, highly motivated, outgoing, and assertive. Alternatively, successful salespeople scored lower for traits such as cooperativeness and patience.

Tests that assess traits related to customer service are also increasingly popular because customer service representative positions tend to have above average turnover rates. This leaves HR managers scrambling for tools that can help remedy this problem. Personality tests are particularly useful for minimizing voluntary turnover because they seek to uncover not whether candidates are capable of doing a job, but whether candidates will be content and comfortable performing that job based on their fixed personality traits.

Customer service personality tests are not strictly reserved for customer service representatives, however. These types of tests have been growing in popularity because many organizations place a heavy emphasis on cultivating a "culture of customer service" across an entire organization, in industries as diverse as medical care providers, banks, and non-profits. Companies may find a lot of value in administering these tests to applicants for managerial and administrative positions if their jobs will involve frequent interactions with customers or the public at large.

Another type of personality test seeks to assess a candidate's integrity or honesty. These assessments, known as integrity tests, help employers manage risk by assessing the likelihood that an applicant will be a reliable employee who will follow the rules. Most integrity tests focus on an applicant's tendencies and attitudes relating to rule adherence. These tests can be used to predict behavior with respect to a wide variety of counterproductive work behaviors (CWBs) that employers want to avoid, including tardiness, absenteeism, time-wasting, theft, fraud, drug use, and safety violations. Integrity tests are most widely used and are most effective for entry-level positions for which overall reliability and rule-following is particularly important. Integrity tests are most commonly used:

In all of these cases, integrity tests serve as a risk management measure by determining which applicants represent a higher risk of engaging in these behaviors based on their responses and personality profiles. Employers often use background checks during the hiring process to mitigate risk, but background checks are expensive and only target people who have a past record of committing crimes. Integrity tests, on the other hand, will help reduce risk with regard to a host of unproductive behaviors that, while not necessarily as serious as felonies, are generally undesirable. By using integrity tests early in the hiring process, employers can save time and costs while still minimizing risk by screening out applicants that might exhibit workplace behaviors that can damage their organizations.

Skills tests measure job-related competencies; broad ones like verbal, math, and communication skills, or narrow ones like typing and computer skills. These are skills that candidates have picked up through their education and career histories – these skills do not necessarily reflect basic aptitude but instead reflect acquired knowledge – what the applicant already knows how to do based on previous experience.

General skills tests (for example, the Criteria Basic Skills Test) that measure overall job readiness skills such as literacy, numeracy, and attention to detail, can be effective predictors of job performance for a wide variety of entry-level positions. Many skills tests, however, measure more specific acquired competencies such as typing speed or knowledge of specific software applications. It is important to realize that such "micro-skills" tests are not designed to predict long-term job performance, as most aptitude and personality tests are; rather, they are intended only as an indicator of a person's current skill level in key job-related competencies.

To maximize the effectiveness of pre-employment testing, one useful strategy is to use more than one type of test. For example, it's very common to test aptitude and personality, or skills and personality. Using more than one test for each candidate allows employers to assess more than one relevant aspect of an applicant, providing more objective, reliable data to streamline the hiring process and make more informed decisions.

How Widespread is Pre-Employment Testing?

The use of pre-employment testing has grown dramatically in recent years. With applicant pools on the rise due to the ease of applying online, hiring managers and recruiters are starting to rely more on data-driven talent management practices that streamline the hiring process. According to surveys done by the American Management Association (AMA), the use of pre-employment testing has been growing steadily in the past fifteen years. The AMA's data revealed that: 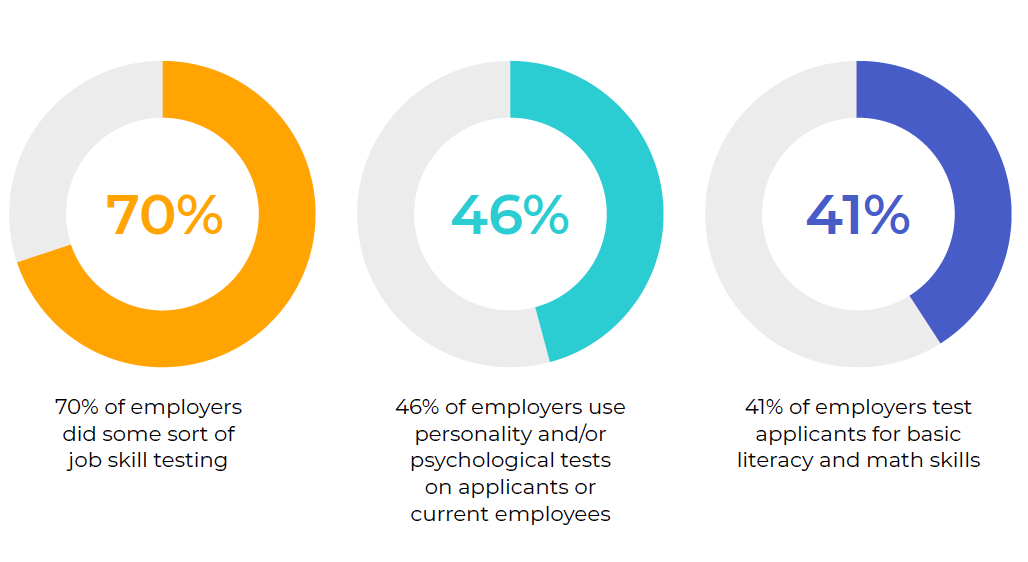 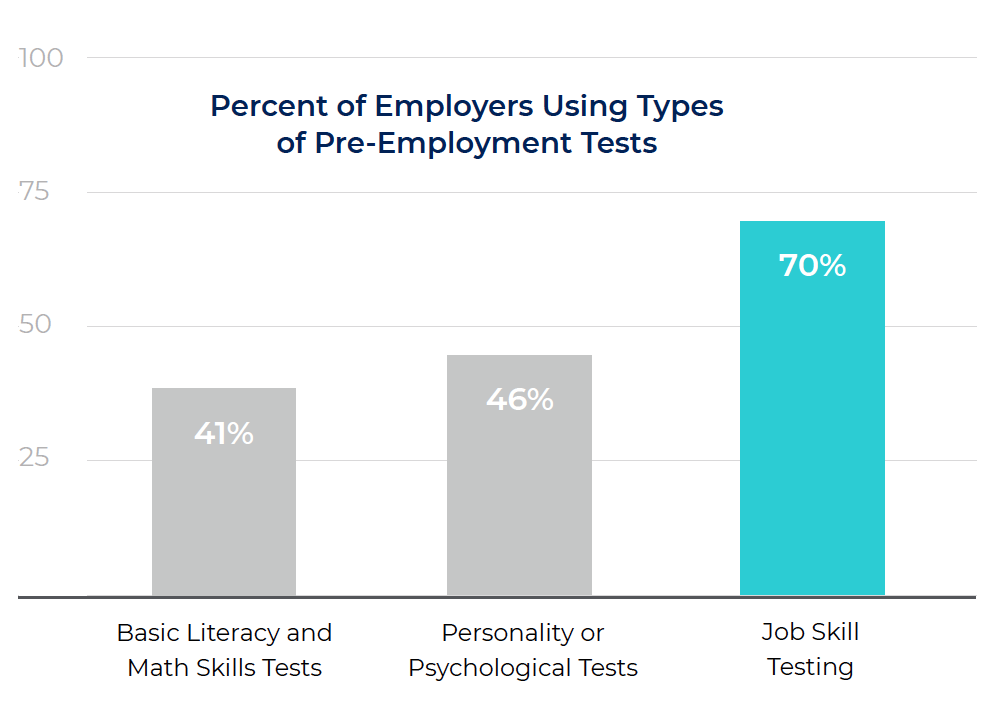 Figure 3: According to surveys conducted by the American Management Association (AMA), 70% of employers do some sort of job skill testing, 46% of employers use personality and/or psychological tests on applicants or current employees, and 41% of employers test applicants for basic literacy and math skills.

The AMA's data are based on surveys of its membership, which tends to be made up of larger organizations. Criteria Corp believes small- and medium-sized businesses should also be able to enjoy the benefits of using pre-employment tests, and our mission is to make these assessments accessible to organizations of all sizes.

What to Expect from Pre-Employment Testing

What kinds of results should companies expect from using pre-employment tests? It is important to have realistic goals and expectations for what a pre-employment testing program can achieve for an organization. By using professionally-developed, validated testing instruments, employers are adding objective, data-driven metrics to the hiring process. Using tests should drive incremental improvements in the hiring results, and minimize the risk of bad hires. It should also dramatically streamline the hiring process, and translate into demonstrable improvements in a business by reducing turnover, lowering hiring and training costs, and improving productivity. This streamlining process should result in tangible gains – using an ROI Calculator can help demonstrate the returns a company can expect after implementing testing.

However, it is equally important to be realistic and understand what not to expect from pre-employment testing. Tests are not a crystal ball, and anyone who claims otherwise is not being honest. When some testing companies advertise "99.9% accuracy" or claim that employers who use their tests will "Never make a bad hire again," they are either ignorant of how the science behind testing works, or are misrepresenting it to sell their tests. Incorporating tests into the hiring process does not mean employers will never make another bad hire, only that they will make fewer of them. No test is a perfect predictor. Some people who don't test well may be exemplary employees, and some that test well may be terrible employees. While research does indicate that tests are significantly more accurate and reliable as predictors than resumes or interviews, employers must remain aware that there is no single selection methodology that will be 100% accurate in predicting performance.

As a result, pre-employment tests should only be one element within a comprehensive set of criteria used to evaluate applicants, including resumes, interviews, job experience, education, and anything else that is relevant for a position. Pre-employment tests provide the most value when applied at the top of the hiring process to screen out candidates who aren't a good fit. Ultimately, however, organizations that use tests are making their final decisions based on many factors, of which tests should be one important component. Companies should expect tests to streamline and improve the hiring process, not replace it.