What to Expect on the Criteria Cognitive Aptitude Test (CCAT) 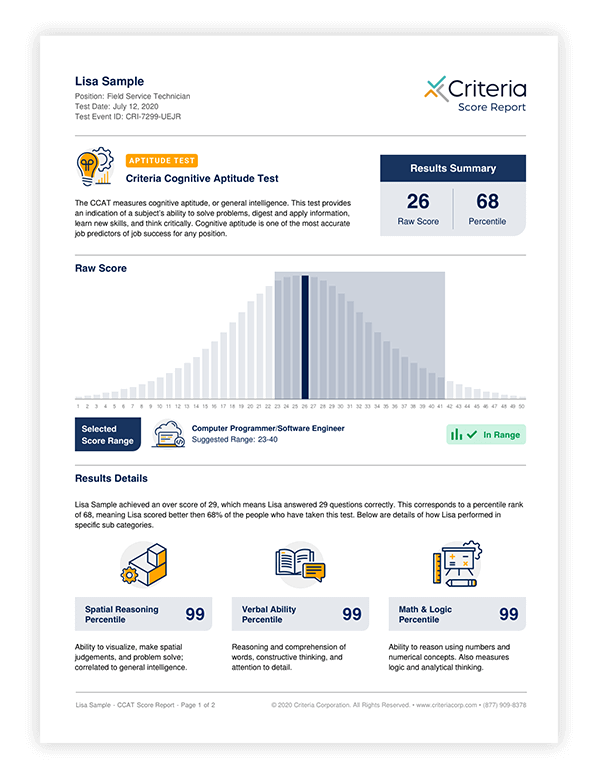 The Criteria Cognitive Aptitude Test, or CCAT, measures your ability to problem solve, use new information, and think critically. Why do employers want to learn about your cognitive ability? Because how well you do on the test tells employers how easily you’ll pick up training for your new role. Research shows that cognitive aptitude is one of the best predictors of your job performance. It’s significantly more predictive than interviews, previous job experience, and your education level. At first glance, the Criteria Cognitive Aptitude Test (CCAT) is intimidating. But don’t panic! You don’t need to get all the questions right to shine in front of employers. Keep in mind that most people don’t make it all the way through the test. In fact, the average test taker only gets 24 questions right.

The most common mistake test-takers make is rushing through instructions. Keep in mind that you can take all the time you need to read and understand them! Based on the instructions, you can create a strategy to get the highest score you can. On the CCAT, there’s no penalty for wrong answers. So, if you are having trouble with one particular question, it’s best to guess and move on.

Play to Your Strengths

It’s uncommon for people to have equally strong math and verbal abilities. Most people favor either their ABCs or 123s, not both. Make sure you’re giving yourself a chance to answer all the questions that you’re more comfortable with. For example: if your math skills are rusty and word problems specifically throw you for a loop, it’s okay to hazard a guess and move on to questions you’re more likely to get right.

You’ve only got 15 minutes to get through 50 items, which works out to less than 20 seconds to answer each question (eek!). But remember, you don’t have to get through all the questions to impress the hiring manager. Make sure you’re not spending too much time on any one question. If you find that you’ve spent more than 1 minute on a problem, make an educated guess and move on to the next one!

You’d never run a race without completing a warmup routine beforehand, so why wouldn’t you warm up your brain before taking a pre-employment test? JobFlare®, a free app, makes your CCAT prep fast and fun.

A little extra prep never hurt anyone, so download JobFlare® and give it a try!

Preparing for The CCAT: Question Types

Why do employers care about your verbal abilities? Well, can you think of a job where your ability to communicate isn’t important? Employers want to be sure that you’ll be able to communicate clearly with both coworkers and customers, whether you’re emailing members of your team, giving a presentation, talking on the phone, or helping clients. The CCAT’s verbal questions evaluate how well you can figure out a word’s precise meaning, how words relate to one another, and what role context plays in your word choice.

Choose the word that is most nearly OPPOSITE to the word in capital letters. LENGTHEN

Remember when you were slogging through your algebra class thinking, "When am I going to use this in the real world?" Well, welcome to the real world, where employers care about your mathematic abilities. Why? Because your numerical reasoning skills and your number sense are directly related to your ability to think critically and solve problems.

The CCAT tests your basic algebra skills, ability to determine proportions, and work your way through word problems. There's no need to panic or whip out your old trigonometry and calculus flashcards! None of the questions require a calculator to figure out - put those mental math skills to work.

Okay, testing math and verbal abilities before hiring makes sense, but how can mentally manipulating random shapes tell employers about how you'll do on the job!? While it may seem completely unrelated, spatial reasoning questions test your innate aptitude and how well you'll be able to learn, solve problems, and make use of new information correctly. Most jobs require some level of problem solving or critical thinking skills on a daily basis, so it makes sense that employers are interested in assessing them.

The CCAT will evaluate your spatial reasoning skills by having you rotate or flip images in your head, recognize patterns, and identify outliers.

Which of the following does not belong?

Your CCAT score is just one of many factors an employer will take into consideration when making their hiring decision. The best thing you can do is prepare yourself as much as possible, and make sure you take the test when you have time to set aside that will be free of distractions. Use JobFlare as a mental warmup before your test to make sure you’re alert and ready to take on the CCAT.

If you have any questions about our tests, learn more on our FAQs page.