Why Do Companies Use Pre-Employment Tests?

Throughout any hiring process, employers necessarily aim to gather as much relevant information on their candidates as possible. The problem is that traditional methods of getting to know candidates — resumes and interviews — often don't yield the best insight. Resumes are notoriously unreliable – research indicates that up to 78% of resumes contain misleading statements, while 46% contain actual lies. Similarly, interviews — especially unstructured ones — are subjective and ultimately serve as poor predictors of job performance.

In contrast, properly developed and well-validated tests are a reliable and objective means of gathering job-related information on candidates. Pre-employment tests introduce an element of objectivity into the hiring process by providing concrete results that can be standardized across all applicants. Employers can then use these data to make better informed, more defensible hiring decisions.

Even more importantly, companies that use pre-employment testing can experience tangible positive impacts in their business. The two most common hiring-related pain points for HR professionals and business owners alike are that organizations are spending way more time than they'd like on hiring, and yet despite this, they are still making more hiring mistakes than they can afford. Pre-employment tests can help directly with both of these concerns: by dramatically reducing the time spent reading resumes and conducting interviews, pre-employment tests will help reduce the time and costs associated with hiring. And by providing reliable, objective data that predict job performance, tests should increase the quality of hire and reduce the number of bad hires. Ultimately, this will lead to bottom line improvements like increased workforce productivity and reduced turnover.

The Main Benefits of Pre-Employment Testing

Pre-employment tests offer wide ranging benefits that not only streamline the hiring process, but also strengthen an entire organization by increasing the likelihood that new employees will be successful in their positions. Pre-employment testing can help ensure alignment between the employee selection process and desired business outcomes such as lower turnover, increased sales, and higher customer satisfaction. The most significant benefits a company may experience by implementing an effective employee testing solution include: 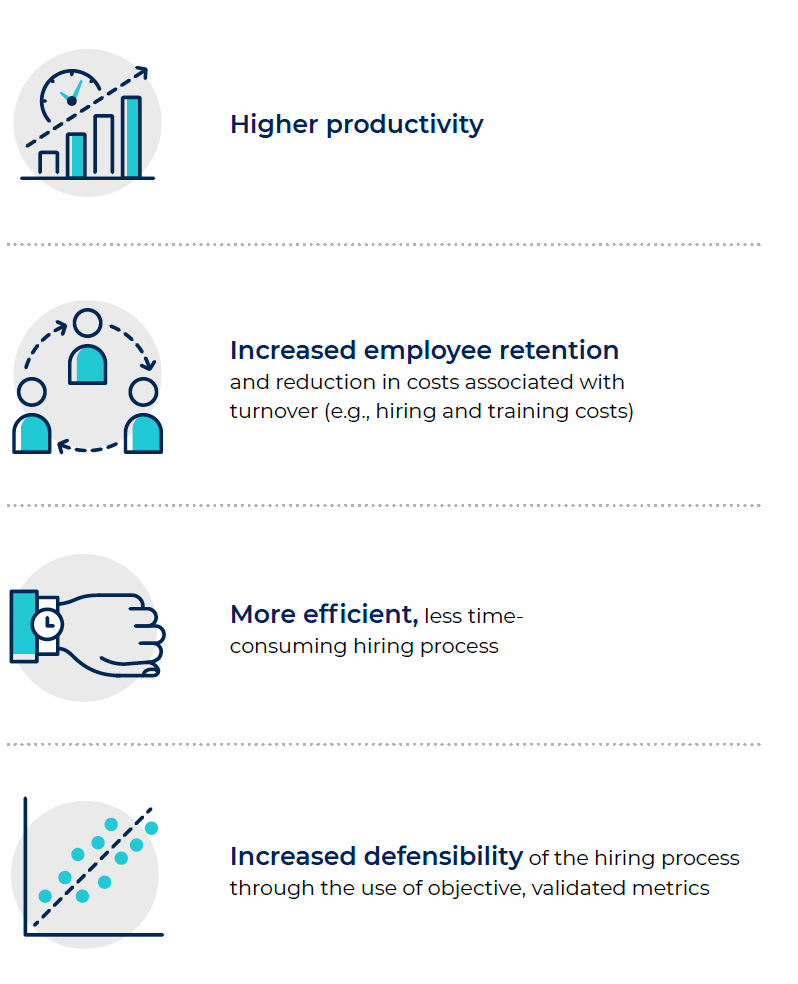 Research demonstrates that professionally developed, well-validated pre-employment tests can successfully predict employee productivity across a wide range of job types and industries. Tests are among the most accurate means of predicting performance because they can objectively determine the extent to which a candidate has the knowledge, skills, and abilities to perform well at any given job.

Consider the case of a clothing retailer that sought to improve the productivity (as measured by hourly sales volume) of its sales associates. They gave their current employees the Criteria Basic Skills Test (CBST), which measures basic math, verbal, and communication skills, as well as attention to detail. By examining the relationship between test scores and average sales per hour, the company was able to determine that employees who achieved high scores on the test sold, on average, $98.02 of goods per hour, while those who received low test scores sold only $81.45 per hour. In other words, those salespeople who passed the test were on average 20% more productive than those who didn't. When correlations between test results and various desirable business outcomes -- including productivity, retention rates, customer satisfaction ratings, and training expenses - can be linked to each other in a data-driven way, it is relatively simple to demonstrate the dramatic Return on Investment (ROI) of employee testing. 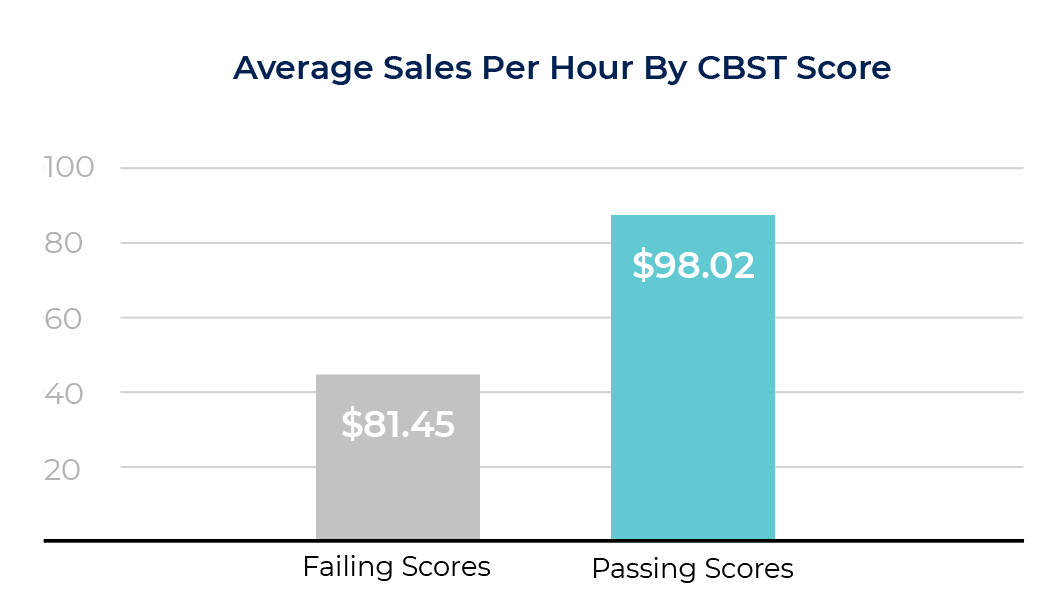 Figure 4: Employees who achieved high scores on the CBST sold, on average, $98.02 of goods per hour, compared to $81.45 for those that received low scores.

Increased Employee Retention and Reduction in Costs Associated with Turnover

Pre-employment testing can increase employee retention by ensuring that new employees have the basic aptitude required for the job along with the appropriate temperament, or personality, to feel comfortable with the type of work required of them. These factors may reduce the likelihood of employees being let go for performing poorly or not successfully completing training (involuntary turnover) as well as the likelihood that employees will quit of their own accord (voluntary turnover).

One example demonstrating the value of pre-employment tests as a means of reducing turnover is provided by the case of a call center in the financial services industry. Like many call centers, employee retention represented a significant business challenge, so the company decided to administer the Criteria Basic Skills Test to all new hires and then analyze the relationship between test scores and retention rates after six months. What they found was that the employees with higher test scores were both less likely to be fired and less likely to quit. The 6-month retention rate for low scoring employees was 56%, while the rate for high scoring employees was 67%.

Reducing turnover can have wide-ranging benefits that ripple through an entire organization. Lower turnover rates boost employee morale and elevate a company's reputation externally, which in turn makes it easier for a company to attract and hire better quality candidates. Reducing turnover also leads to more concrete benefits to a company's bottom line. Some of the expenses associated with replacing an employee include recruitment, selection, training, and occasionally severance pay for the departing employee. One study estimates that replacing entry level employees costs about 16% of their annual salary, and this number increases even more for higher-paid positions – to replace mid-level employees, it costs about 20% of their annual salary, and to replace high-level executive employees, it could cost over 200%. As a result, there is clear incentive for companies to find ways to reduce turnover in their employees.

One national consumer lending company wanted to improve the quality of the employees they hire in order to reduce hiring and training costs. New employees were required to complete a rigorous 3-4 week training course followed by a federally mandated licensing exam. Due to the complexity of the training, a substantial number of new hires were not passing the course required to become hired as long-term employees. The company decided to administer an aptitude test to an incoming group of new hires to determine if the test could predict performance during the training period. What they found was a very strong correlation between test scores and successful completion of training. Of those who scored in the highest tier, 100% completed their training and passed the licensing test. The success rates declined steeply for groups of new hires with lower scores. 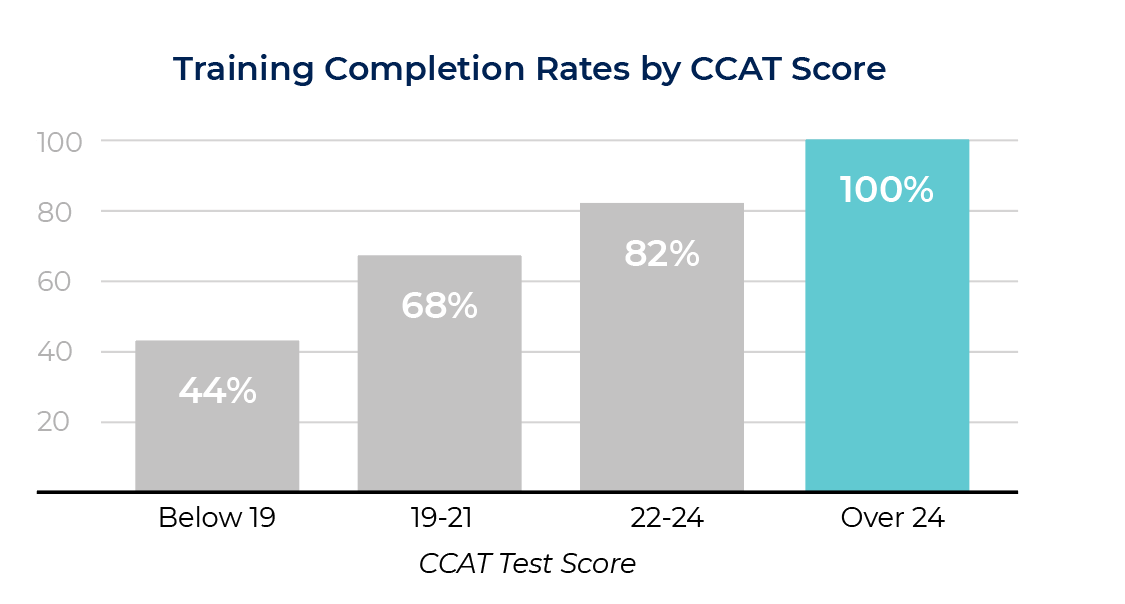 Figure 5: One finance company administered the CCAT aptitude test to a group of incoming trainees and compared their test scores to their training completion rates. Of the group that scored above average on the CCAT, 100% completed training. Completion rates decreased for groups that scored lower on the aptitude test.

Implementing aptitude tests for a position at this level is especially worthwhile due to the cost and time commitments required for training new hires. Because aptitude is such a consistent indicator of future performance, implementing this kind of test early can drastically reduce the costs associated with turnover by limiting the amount spent on hiring and training employees that may be ill-equipped for the position.

The recruiting process can be incredibly time-consuming – it typically takes about 45 days to fill a new position. However, only 43% of job openings are filled within 30 days according to the Center for Economic and Business Research. The other 57% that get filled within that first month are likely to stay open for 90 days or more. This is not due to a lack of applicants – an average of 250 resumes are submitted for each online posting, and our own data suggests that the average size of applicant pools for each open position more than doubled from 2009 to 2015. Rapidly growing applicant pools are making it increasingly difficult for recruiters to manage applicant flow and identify the right candidates within a sea of resumes. Including pre-employment tests in the hiring process can dramatically streamline this process.

Pre-employment tests offer the most time-saving value when administered at the top of the hiring funnel. By requiring that applicants take the tests early on, companies can weed out a lot of the "resume spammers" who send out their resumes with minimal thought or effort. The applicants who end up completing the tests are, at the very least, serious enough about the position to put in the time to take the tests.

Moreover, setting minimum cutoff scores for certain tests can quickly narrow down the number of applicants to select for phone or in-person interviews. Reducing the time spent on the interview process drastically reduces the overall time spent recruiting employees - research indicates that the average recruiter spends nearly 63% of his or her time on the phone per week. Meanwhile, in-person interviews last an average of 40 minutes. Pre-employment tests limit the hours spent on time-consuming recruiting activities by making it easier to discover the right candidates with the most potential for success on the job.

Increased Defensibility in the Hiring Process

Besides helping a company realize improvements in various business outcomes, pre-employment testing can also enhance the objectivity, equitability, and legal defensibility of an organization's hiring process. All companies should strive to utilize equitable and legally compliant employee selection and promotion practices. Pre-employment tests are governed by federal guidelines intended to ensure equitable and non-discriminatory hiring practices. Because of this, some companies believe that utilizing employment tests increases a company's legal exposure. However, the same guidelines that govern pre-employment testing govern all selection methodologies used by employers. While employers should be aware of the legal compliance issues surrounding employment testing, it is important to realize that employment testing can actually augment legal defensibility by enhancing the objectivity of a company's employee selection procedures. Organizations that implement testing programs in accordance with legal guidelines are therefore better prepared to defend these procedures in the unlikely event that a legal challenge to their hiring practices should ever arise.