A major national consumer lending company wanted to improve its quality-of-hire and reduce hiring and training-related costs. With the advent of new federal regulations surrounding consumer lending, the company wanted to ensure that its new hires would be able to learn and apply the information they were provided in their initial training, and to reduce the considerable costs incurred when new trainees could not successfully complete the training program.

The organization used the Criteria Cognitive Aptitude Test (CCAT) to screen an incoming group of 105 new hires for its loan officer positions. The new hires then underwent an extensive 3-4 week training courses, at the end of which they were required to take federally mandated licensing exams in order to serve as Loan Originators. Individuals who did not successfully complete training and pass licensing exams were not retained. After the training period was completed, the company compared the new employees' test scores with their training performance. 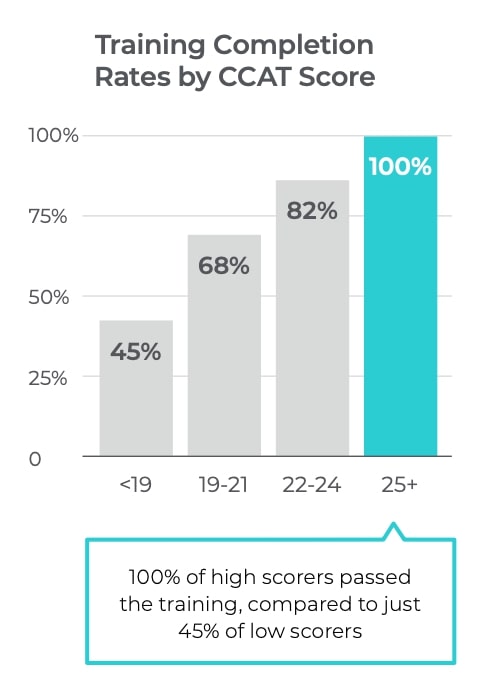 The CCAT proved to be a remarkably accurate predictor of which employees would successfully complete the training period and become hired as long-term employees. There was a very strong, statistically significant correlation (.51, p < .05) between CCAT scores and performance during the training period. Of the 49 new hires who received the highest scores on the CCAT, all 49 completed training successfully and passed the licensing test. Of the lowest scoring group, on the other hand, only 9 of 20 new hires (45%) successfully completed training. As the chart below indicates, there was a strong correlation between CCAT scores and "trainability."

Because the CCAT proved to be such an accurate predictor of whether an individual would successfully complete its training program, the company incorporated the CCAT into its employee selection process for all new hires. This enabled the company to reduce turnover, lower hiring and training costs, and better direct its training efforts.