Heartland ECSI's HR department started measuring turnover rates and realized that their 2016 turnover rate was around 75%. By comparison, average turnover for a call center tends to sit around 30 to 45%. To Mike Bowman, Heartland's Senior Call Center Manager, 75% was a "scary number."

"We brainstormed as an executive team what to do about this, since obviously there's a cost involved with this constant churn, particularly in our call center. One of the things that came out of that meeting is we needed to have some sort of screening in place, because we weren't confident we were getting the right fits for our call center jobs."

Heartland ECSI decided to use Criteria Corp's tests as a way to identify the candidates who had the right set of aptitude, personality, and technical skills for their call center. The company used the Criteria Cognitive Aptitude Test (CCAT), a general test of aptitude; the Employee Personality Profile (EPP), a general personality test; the Computer Literacy and Internet Knowledge Test (CLIK), and a Typing Test.

After implementing Criteria's tests, Heartland wrapped up 2017 with a 26% turnover rate, representing a massive 65% reduction in turnover from the previous year. Heartland's initial goal for using tests in the hiring process was to reduce turnover, and these dramatic results served as a powerful validation of Heartland's decision to implement testing.

As a result of the improved turnover rate, Heartland noticed a dramatic increase in retention and average seniority. Prior to using testing, just 50% of their staff had been at the company for more than 90 days. From Mike Bowman's perspective, this was far from ideal:

"There's a real production drag that happens when half your staff is brand new. They have a lot of questions, they're moving slower, they're not helping as many clients."

Now that Heartland uses testing, 91% of the staff has been at the company for more than 90 days, representing an 82% improvement in 90-day retention.

Testing enabled Heartland to be more selective about which applicants to hire, which Mike Bowman says contributed to their reduction in turnover. After implementing testing into the hiring process, Heartland hired about 1 in 4 of the applicants that applied to its call center positions. Because Heartland administered the tests at the start of the hiring process, the tests provided useful guidance to help filter and target the best candidates for the role.

Heartland's entry-level call center employees go through a four-week training period before they start their job duties, and any trainees who are struggling typically receive one to two weeks of additional coaching. Because Criteria's tests helped identify candidates who were better fits for the role, Heartland experienced a noticeable rise in the quality of candidates. This led to a faster training process because the candidates not only had the base level of skills required but also were able to pick up training much more quickly.

Heartland uses temp agencies to fill a lot of its call center roles and converts these individuals into full-time employees after 90 days, which is why the 90-day retention metric is so critical to the company. During that initial 90-day period, Heartland pays a premium to the temp agency, amounting to approximately $6 an hour per person. Heartland estimated that lower turnover enabled them to hire about 10 fewer people per month, amounting to cost savings of about $10,000 per month or $120,000 a year, just for temp agency fees alone.

While turnover was the main problem Heartland set out to solve with testing, the company also wanted to make sure that the employees who stuck around continued to meet the minimum standards of performance. What they found was that testing actually led to even higher average performance. 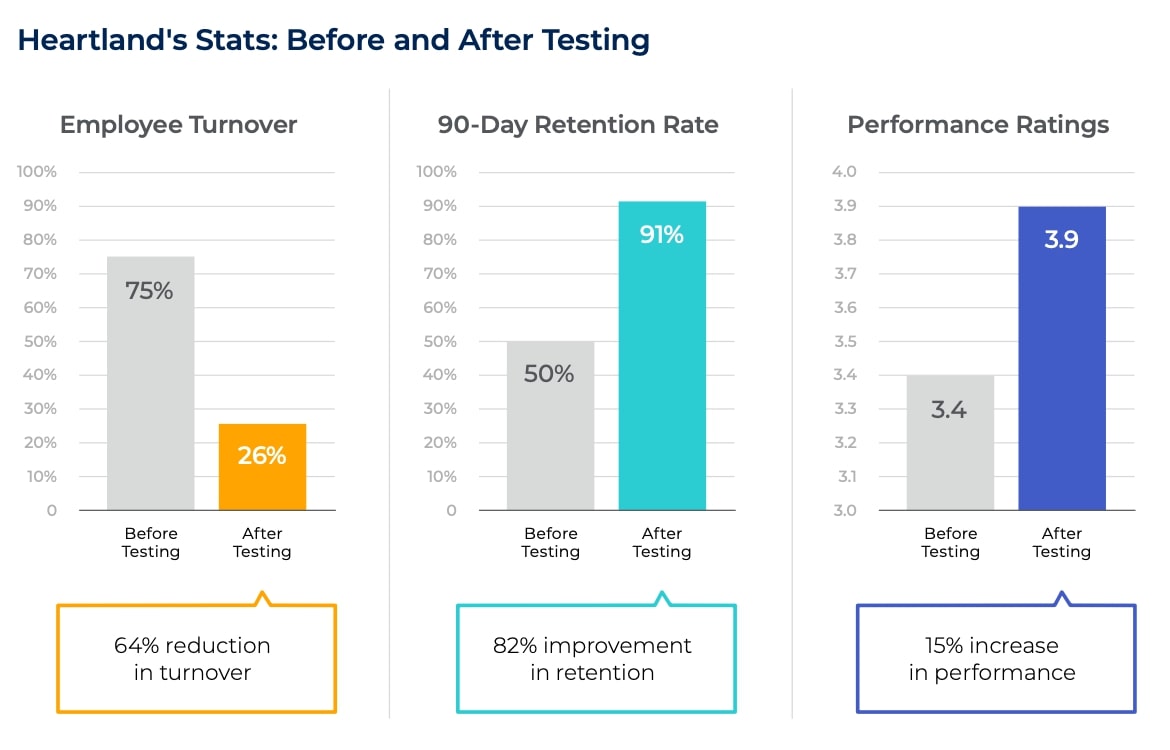 Founded in 1972, Heartland ECSI provides exible technology solutions to enable colleges and universities to offer student loan services to their students. Heartland operates call centers that provide customer support to students calling in with questions about their student loans, related taxes, payment plans, and more. Because the student loan industry is highly regulated, call center employees at Heartland need to be well-versed in compliance guidelines while maintaining a positive customer service experience.