Besides helping a company realize improvements in various business outcomes, pre-employment testing can help enhance the objectivity, equitability, and legal defensibility of an organization's hiring process. All organizations should strive to ensure that all of their employee selection methods are equitable and legally compliant. As long as the tests are assessing skills and traits that are job-related, using tests will make hiring decisions more defensible by adding an extra layer of objectivity to the hiring process. Organizations that implement testing programs in accordance with legal guidelines are therefore better prepared to defend these procedures should a legal challenge to their hiring practices ever arise.

Like all the other elements of a company's hiring process, pre-employment testing is subject to a series of federal laws governing hiring practices. The most important legal standards related to testing are contained in the Uniform Guidelines on Employee Selection Procedures (UGESP), which explicitly recognizes the right of employers to use pre-employment tests to make hiring decisions as long as those tests are job-related. The UGESP provides interpretive guidelines for federal agencies charged with enforcing the Civil Rights Act, and is designed to ensure equitability and prevent unfair discrimination in hiring. These guidelines inform the decisions made by the Equal Employment Opportunity Commission (EEOC), the federal agency that enforces federal employment discrimination laws.

Pre-Employment Tests Increase the Defensibility of the Hiring Process

One common misconception with pre-employment testing is that utilizing tests as part of the hiring process increases a company's legal exposure or somehow leads to additional legal risk. For companies that use professionally-developed, well-validated tests, the opposite is in fact true. Pre-employment tests, like other selection methodologies used by an employer, are governed by the same federal guidelines intended to ensure equitable and non-discriminatory hiring practices. This means that the same laws that apply to the use of pre-employment tests also apply to all other selection methods, which may include screening candidates by experience and education, conducting interviews, checking references, and more. Using relevant employment tests exposes companies to no greater risk than using any other hiring criteria. 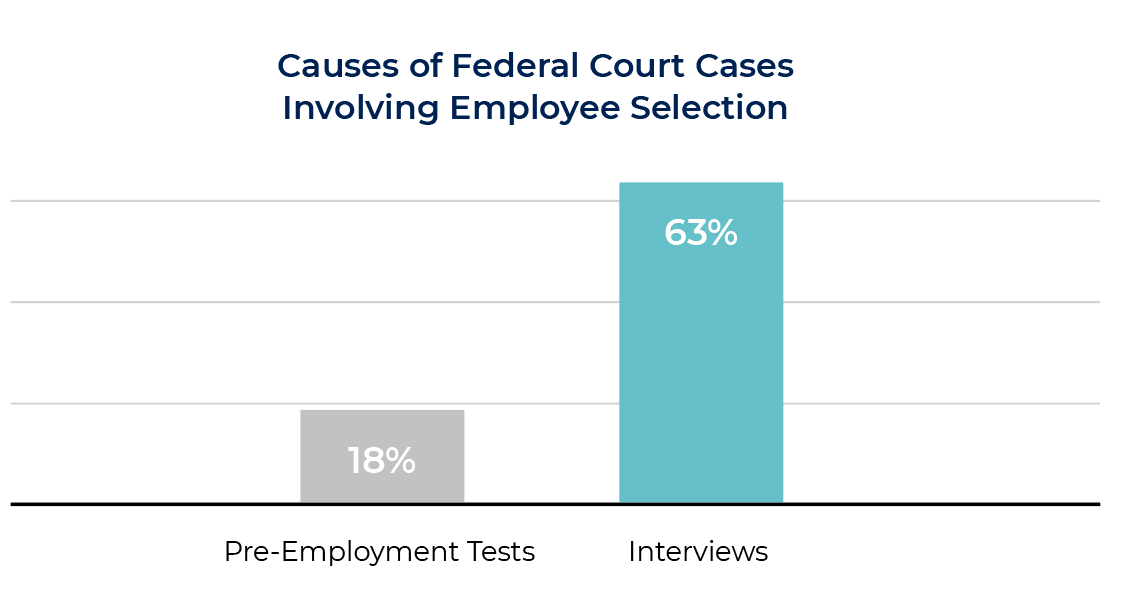 Instead, the proper use of testing as a selection tool should actually reduce the likelihood of being sued. This is because testing makes the selection process fairer and more objective for all candidates. Tests are less subjective than interviews, where the personal biases of interviewers are much more likely to lead to discrimination claims. In fact, a recently published study shows that companies are over three times more likely to be sued because of interviews than for their use of aptitude, personality, or skills tests.

Pre-employment tests also help minimize liability risk by enabling companies to more closely follow the guidelines of the EEOC, which stipulate that companies use reasonable efforts to remove biases from their hiring processes. Using validated tests that do not discriminate according to age, sex, race, or other factors can reduce subjective biases and insert an objective, reliable data point into each hiring decision.

Additionally, tests may help minimize the risk of hiring employees who may expose the company to even greater liability – some pre-employment tests can measure how likely it is that an applicant might engage in unsafe or unethical behavior on the job. Using pre-employment tests to assess and minimize these types of liability risks generally far outweigh the minimal risk associated with administering the tests.

Pre-employment tests can only reduce a company's legal exposure if the tests measure skills and traits that are related to performance for that particular position. This concept is known as the rule of "job-relatedness." In this instance, the EEOC's guidelines surrounding the use of tests are the same as their rules for any selection procedures: the tests must measure job-related skills and abilities. As a result, test selection is critical to legal defensibility. No matter how valid a test is, it won't be legally defensible if it is used in an invalid way. For example, a bank teller's daily work requirements might include adding and subtracting numbers, looking up customer activity, and filling out paperwork. Therefore, using an employment test that measures an applicant's fluency with basic mathematical concepts and ability to read and write would clearly be testing job-related capabilities. On the other hand, using a typing test for a forklift driver who won't be required to type is NOT a job-related selection measure. Using well validated tests and making sure that the tests, as well as all other selection methods, are job-related, is the best way to ensure legal compliance.

Is it Illegal to Use Certain Types of Tests?

Selecting tests that fulfill the "job-relatedness" rule is critical. But in some situations, is it ever illegal to use certain types of tests for the purposes of employee selection? The answer is yes. For example, the Americans with Disabilities Act (ADA) prohibits the use of pre-hire tests that may be construed as a "medical exam" or a test of mental health in a pre-employment setting. One of the purposes of the ADA is to prohibit discrimination against individuals with psychiatric disabilities, meaning that clinical tests that assess an individual's mental health should generally not be used for employee selection.

For example, personality tests that are designed to screen for psychopathologies, such as the Minnesota Multiphasic Personality Inventory (MMPI), should not be used as part of an employment testing program. There are exceptions to this rule, and tests judged to be medical exams may be permitted if they are shown to be job-related and consistent with business necessity. In practice, this means that these exams are typically allowed for jobs that have public safety implications — for example, police forces commonly screen for psychological disorders. However, psychological tests that are deemed to be "medical exams" generally should not be used for employee selection purposes.

Legal challenges to hiring practices are rare, but when they do occur, they are often connected to the issue of "adverse impact," also known as "disparate impact." Understanding the concept of adverse impact is central to understanding many of the issues surrounding legal defensibility in testing. Adverse impact is said to occur when members of a protected group or minority (e.g., a particular race, gender, etc.) receive unfavorable employment decisions (e.g., not being hired) more often than another nonminority group.

Unlike many of the above means of evaluating potential employees, aptitude tests are generally extremely effective predictors of workplace performance. It is also important to note that using a test that results in adverse impact is legal as long as it is job-related and consistent with business necessity. Most of the best practices for pre-employment testing described earlier in this guide are intended to provide details about how companies can ensure that the tests they use are job-related. In addition to ensuring a testing program is legally compliant, following the rule of job-relatedness will allow a company to be confident that its testing program will be effective, because the tests will be measuring job-related abilities, skills, or traits.