This is the question that Tony Burns, the General Manager of Macfab Manufacturing, was looking to answer. A few years prior, Macfab Manufacturing was reflecting on how much it had grown over the last 30 years and realized that its human resources department needed a lot of attention. Growth was stagnant, the culture had become toxic, and it was starting to impact the performance of the business as a whole.

Based in Ontario, Canada, Macfab Manufacturing started out in 1987 as one man working out of the basement of his house. From there, it expanded from a local machine shop into a full-fledged manufacturer, producing precision components for everything from biomedical devices to satellites and serving customers on an international scale. The technically complex products that Macfab developed and produced required a highly skilled and reliable workforce, and the organization needed a better way to hire, train, and retain its employees.

To tackle the problem, Macfab sought to incorporate best practices across the board. They started by evaluating 12 years of hiring data to identify areas for improvement. The insights from this process enabled Macfab to make several key improvements, including:

The next piece of the puzzle for Macfab’s GM Tony Burns was centered around the employee selection process. “How do I find out the week before I hire an employee what I know the week after I hire the employee?” This question was particularly important for Burns because employees at Macfab typically undergo three to six months of training in order to get up to speed in these highly technical roles, including machinists, operators, and production managers. Improving the training completion rate and long-term retention was critical to improving the company’s performance as a whole.

Macfab turned to Criteria’s pre-employment tests as a way to evaluate candidates on critical capabilities and competencies before making a hiring decision. The company decided to administer 4 different assessments at two different stages of the process.

From there, the Macfab team sought to improve retention even further by turning their attention to the hiring process. To achieve this goal, the company began using Criteria’s assessments to evaluate candidates before hiring them. By incorporating four assessments into the hiring process, Macfab was able to further increase its retention from 65% to 90%, representing a 38% improvement.

By achieving a hiring success rate of 90%, the company felt a lot more confident in each new hire. This confidence was passed on to the job candidates themselves. Any job seeker who is interested in starting a new position wants to feel confident that they will be successful in their new role, but Macfab’s lengthy training period of three to six months could potentially feel intimidating to potential candidates.

Armed with the exceptional hiring success rate of 90%, however, Tony Burns could tell a job candidate: “You will go through all of this screening and training, but if we hire you, we can back up through our data and through our process that there is a 90% chance that you are going to be successful here.” This means that candidates who pass through every level of Macfab’s hiring process, including the assessments, can feel that level of confidence. The hiring success rate serves as a measurable confidence level that encourages candidates to accept a job offer, improving Macfab’s ability to attract and hire top candidates. 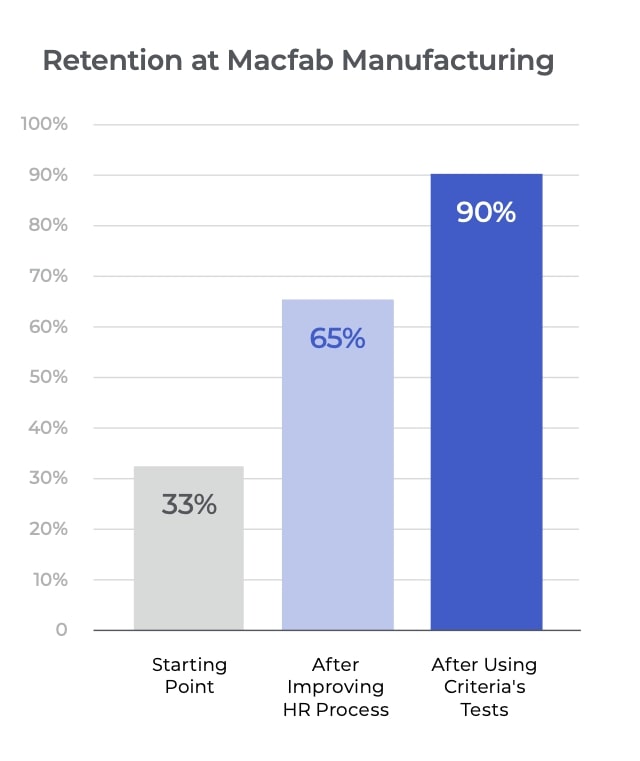 With an extensive training program of three to six months, making the correct hiring decision is crucial for Macfab Manufacturing. Using the assessments in the hiring process enabled the company to learn more about its candidates in advance, both from a personality fit perspective and from an ability perspective. Armed with this additional information, Macfab was able to raise its hiring success rate to 90%, which in turn helped to improve the training completion rate and lowered training costs dramatically.

Before Macfab initiated the process to improve its HR program and hiring process, the company’s work culture was in need of improvement. According to Tony Burns, the culture had become toxic. After major improvements across the board, and with the help of Criteria to improve retention, Burns can happily say that Macfab now has “a very positive work environment.”

Founded in 1987, Macfab is a manufacturer of precision components based in Ontario, Canada. With customers across the globe, Macfab specializes in producing components for space and satellites, optics and photonics, analytical instruments, and defense and security.