8 Examples of Unconscious Bias in Hiring 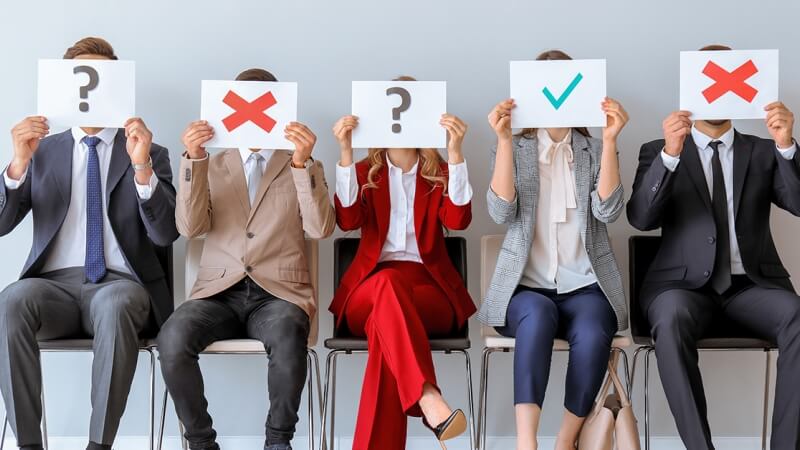 Unconscious bias plays an inevitable role in hiring. Every human being on the planet is prone to biased decision-making because it’s built into our brains. Throughout human history, these biases were incredibly helpful because they served as mental shortcuts that helped us maker faster decisions – often the difference between life and death.

In modern times, these mental shortcuts and quick judgments can have unintended consequences. When it comes to hiring, quick snap judgments aren’t all that helpful because our brains are using unconscious shortcuts that really have nothing to do with the task at hand: deciding which candidate is the best fit for a job.

A lot of these biases come down to the feeling of intuition. Otherwise known as “trusting your gut,” intuition is a number-one offender when it comes to unconscious bias. That’s because so many of us have been trained to believe that our instincts know best.

The truth, though, is that our instincts just cannot be objective. Giving ourselves permission to make decisions intuitively instead of considering all the facts during the hiring process opens the door for subjective, and ultimately suboptimal, choices.

Your gut is not a crystal ball, and it’s likely to be influenced by a whole host of irrelevant factors, like how charming, well-educated, attractive, or similar to you a candidate seems. If there’s a candidate you just love from day one, don’t let that stop you from conducting a fair, thorough, and objective hiring process with the rest of your candidates.

While knowledge alone will not protect any decision-maker from unconsciously applying biases to their choices, understanding exactly what unconscious bias looks like is a great first step.

Here are eight types of unconscious biases to be on the lookout for, all with in-context examples that’ll make them even easier to spot:

Confirmation bias happens when we have an initial perception about a candidate, and then we look for and focus on information that supports that initial belief. This includes asking irrelevant, non-essential interview questions that confirm our beliefs, and overlooking red flags that contradict that belief.

For example, imagine that you are interviewing your top candidate for a position. You may unintentionally seek to ask interview questions that play up their strengths rather than asking questions that challenge them to really share information that will help you make a better hiring decision. This is one reason why structured interviews are more effective than unstructured interviews – they force each interviewer to go through the same questions. Not only does this prevent us from going off track with a candidate, but it also makes it easier to compare candidates more fairly at the end.

Affect heuristic is a biased shortcut our brains take to make decisions quickly based on our current emotions. The problem, of course, is that these decisions often have absolutely nothing to do with whether a person is a good fit for an employment opportunity.

For example, let’s say you get into an altercation in the parking lot right before you head into the office to interview a candidate. You may be feeling negative emotions from that earlier incident, and you know those emotions shouldn’t affect how you feel about the candidate you are interviewing that day. But sometimes these current emotions can impact your gut feelings about a candidate, even if it’s not relevant. If you are having a bad day, you may also have a “bad feeling” about a candidate, even if it has nothing to do with their qualifications for the job.

The halo effect is exactly what it sounds like. It happens when we allow a positive attribute about a candidate to blind us from other important indicators.

Say one out of your dozen short-listed candidates went to a top college. Their education inadvertently becomes a halo to you, and you become so charmed by their education you fail to realize they’ve held six different jobs in the past three years.

That isn't to say that strong positive qualities should be ignored – maybe your candidate used to work at a top-tier firm, founded a nonprofit, or even was a former Olympic athlete. These are major achievements that you should view as a positive because they demonstrate grit and determination. However, these isolated positive attributes shouldn’t stop you from viewing the candidate’s qualifications for the role as a whole.

The horn effect is the opposite of the halo effect. The horn effect comes into play when one not-so-attractive thing about a candidate makes you unable to recognize all the good things they have going for them.

Here’s an example: maybe the candidate is a college drop-out, and it causes you to overlook their six years of rapid progression at a reputable competitor. You ultimately pass on even interviewing this candidate, even though they likely deserved a chance at the job (and could have been one of your top employees!). In fact, the college degree requirement is one of the many ways that employers are unconsciously screening out a more diverse candidate pool. Organizations are increasingly giving this requirement a closer look, with many dropping it entirely.

Affinity bias is a type of unconscious bias that occurs when we prefer job applicants that we share something special with. Sometimes that’s an alma mater, membership to the same fraternity or sorority, or having a good friend in common.

It doesn’t have to be as big as that, though. It can be something tiny! An example of this would be gravitating toward a candidate because, through banter, you learn you both love the same spinning instructor at the studio down the street. That’s a fun thing to have in common and may make lunchtime workouts more enjoyable in the future, but it doesn’t actually signal that this candidate will be a good hire.

Unless you work as a casting director or talent agent, beauty biases don’t serve you. A beauty bias inadvertently encourages you to prefer attractive candidates, even though good looks don’t make you a better employee.

You probably know conformity bias by its common name: people-pleasing. Conformity bias occurs when we change our choices to match the opinion of the group, like other hiring managers, the board of directors, or the department we’re hiring for.

Here’s an example: you do a great job overseeing a very fair, objective recruitment process of a dozen or so candidates. Using tools like pre-employment testing, structured interviews, and employment history, you pick a candidate you really think is going to be a star. But the board of directors is pushing for another candidate. Suddenly, you doubt yourself, thinking: if everyone else likes Candidate B, they must be the better choice. Not only can it change your actual perception of the candidate, but there is often real job-related pressure for you to simply agree with the group, whether you consciously acknowledge it or not.

Finally, there’s gender bias, which happens when we show a preference for a certain gender-based on embedded beliefs. The truth is that gender doesn’t determine who will be a good leader, manager, follower, or employee, and this bears out in research. But sometimes, deep down, our brains make snap judgments about people based on their gender.

Gender bias is particularly complex because it’s so pervasive. You may feel there are no good female candidates for CEO because over the decades, women have had fewer opportunities to rise to the top ranks, making it harder for them to put together a CV as shiny as their male counterparts. That’s why diversity hiring initiatives can help make sure candidates of different candidates get a fair shot at jobs. Some organizations that find gender bias to be particularly pervasive end up relying on more rigorous process, including blind hiring, to root out any bias related to gender.

These eight types of unconscious biases are just the tip of the iceberg. There are seemingly infinite ways that biases sneak their way into our hiring processes. While they may be difficult to root out entirely, you should use every tool at your disposal to ensure your company is being as fair as possible, every single time you hire. After all, it ultimately leads you to hire the best person for the team.