As an integrated healthcare platform that manages and operates a network of healthcare clinics, painPRO wanted to hire great employees in an efficient and effective way. To support their many clinics, painPRO regularly hires administrative assistants, healthcare receptionists, and office assistants to form their patient support team. According to Ryan Desrochers, the Co-Owner of painPRO, these administrative team members are “the glue that helps the whole system run smoothly.” Hiring productive employees for these positions was critical.

painPRO was also interested in reducing overall employee turnover. The goal was to identify the right candidates who were most likely to perform well and stay with the organization for the long-term. 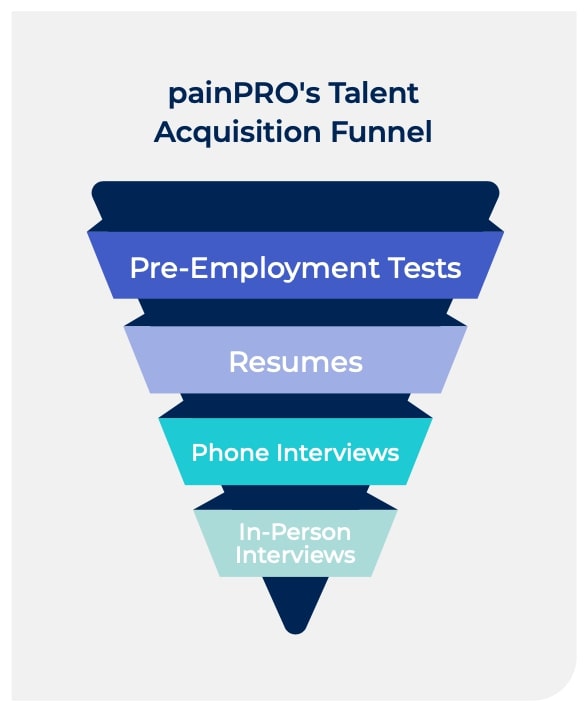 painPRO partnered with Criteria Corp to deliver pre-employment assessments to their candidates using Criteria’s testing platform. The company selected a combination of tests to gain the most useful insight about their candidates at the very start of the application process. The assessments included the Criteria Basic Skills Test (CBST), a test that assesses job-readiness and trainability; the Employee Personality Profile (EPP), a general personality inventory; a computer literacy test; and a Typing Test. painPRO also leveraged several of Criteria’s hiring automation and pipeline tools to streamline the entire hiring funnel.

Dramatic Reduction in Time to Hire

The biggest area of improvement that painPRO immediately experienced was a significant reduction in their Time to Hire. Ryan Desrochers estimated that, in order to hire one person, painPRO’s previous time to hire was 12.5 hours on average. After incorporating Criteria’s pre-employment tests into their hiring process and using the automated pipeline tools in Criteria's platform, the average time to hire dropped to just 45 minutes. This equaled a time savings of 11 hours and 45 minutes per person hired, representing a 94% reduction in Time to Hire.

painPRO was able to achieve these dramatic results by leveraging Criteria’s pre-employment tests to prioritize their candidate pool at the very start of the application process, and by relying on Criteria's tools to organize the process and automate time-consuming manual tasks. 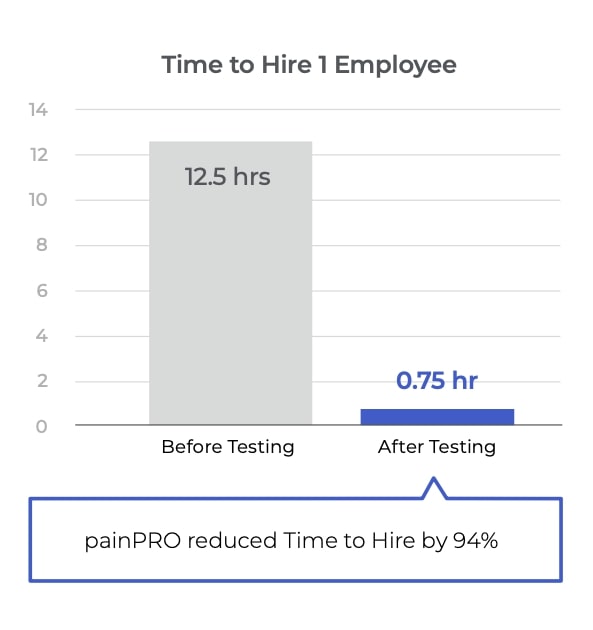 The reduction in Time to Hire translated directly into tangible cost savings for painPRO. Desrochers calculated the company’s cost savings by multiplying the number of hiring cycles per year by the hours spent in the hiring process, then multiplying that by the wages of each interviewer involved. In total, the savings for painPRO came out to $14,564.40 for the year. This conservative estimate did not include any additional intangible savings from reduced turnover, higher quality of hire, and shorter training time.

One of the reasons that painPRO was able to achieve such significant improvements in Time to Hire and Cost per Hire was because they took advantage of Criteria's automation tools. The company used the hiring pipeline feature to set up a talent acquisition funnel that outlined each stage of the hiring process. They then set up automated actions that would trigger a candidate to be moved to a subsequent stage of the funnel. By using these tools, painPRO was able to eliminate many of the manual tasks that were taking up so much time.

According to Desrochers, “our experience with using Criteria's platform can be summed up in two words... highly efficient. Any company or business owner that knows anything about numbers knows that’s all it is. At the end of the day, it’s all a numbers game, and the more efficiently you can run any area of your company, the more profitable it’s going to be and the more successful your company is going to be.”

Criteria made it possible for painPRO to set up a best-in-class hiring process. According to Desrochers, “we had several comments from people who couldn’t believe how organized our process was – and some of these people had been applying to government-regulated hospitals.” This efficient and organized process not only helped painPRO reduce their Time to Hire internally but also helped them project a strong employer brand as a professional and desirable place to work.

The biggest improvement to the candidate experience came from painPRO’s ability to reduce the Time to Hire with a highly organized hiring process. However, the candidate experience was also improved in another unexpected way: candidates who went through the testing stage at the beginning of the hiring process felt more confident and engaged in the workplace. Descrochers heard comments from candidates who essentially said, “If I’m going through this rigorous testing process, I know my coworkers are too, which means the work environment I’m heading into is going to be full of people that are just as competent as I am.” For painPRO the added step of pre-employment testing created an added layer of trust and commitment for the incoming employees.

painPRO Therapeutics is an integrated healthcare platform that manages and operates a growing network of healthcare clinics that provide services in massage therapy, physiotherapy, chiropractic, and kinesiology. Based in Vancouver, painPRO is dedicated to giving patients easy and convenient access to quality care.