As a customer contact center, Incept's mission was to help their clients connect with their customers. To achieve this goal, Incept had high expectations for their employees. To Allison McConnell, Director of Employee Results at Incept, "Our expectation is that we hire for great customer service – people who can have a productive conversation, get to the root of the issue quickly, and create a good experience."

When hiring new employees, Incept's goal was to identify the candidates that were most likely to be a successful fit for their roles, but the sheer volume of candidates presented a challenge. With around 300 applicants per job opening, they didn't have time to interview them all. Incept needed a way to identify the most promising candidates early in the hiring process before sending them to the more time-intensive interview stage.

Incept decided to administer Criteria Corp's tests to incoming candidates as a way to prioritize which candidates should be invited to the interview stage. According to McConnell, the goal was to "ensure that we were spending our time with the candidates who are most likely to be a successful fit for the role." They incorporated a combination of aptitude, personality, and skills tests into their hiring process to get a clearer picture of each candidate's potential. This included the Criteria Basic Skills Test (CBST), which measures job-readiness and trainability; the SalesAP, a sales personality assessment; the CSAP, a customer service personality assessment; and a Typing Test.  They also worked with Criteria to establish cutoff scores (or baselines) that could be used to qualify someone for an interview, based on performance data of their current staff. 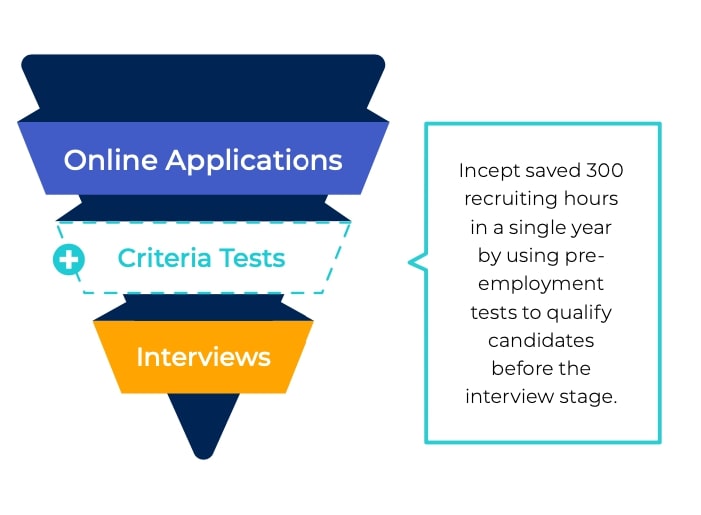 Incept's initial goal was to use pre-employment tests to help prioritize which candidates to invite to the interview stage. By using assessments to provide a signal of candidate potential rather than relying on resumes alone, Incept saved time by not interviewing candidates who were likely to be unqualified for their roles.

Incept worked with Criteria over the course of several years to set cutoff scores that they could use to determine whether each applicant had the necessary qualifications to do the job successfully. Applicants who did not meet the cutoff scores (or baselines) did not qualify for an interview. In a single year, Incept had 1556 total applications online. Of those, 300 did not pass or complete the assessments. With each interview accounting for about 1 hour of recruiting time, the time saved in this step alone was about 300 hours in a single year.

The Criteria Basic Skills Test (CBST) led to visible improvements in how trainable and adaptable Incept's employees became. Over the years, McConnell has found that "the people who score higher on those assessments are more likely to be successful in the role. They are more likely to be able to follow along with training, pick up on the new concepts, and perform effectively in their role."

Incept was able to use scores from the two personality tests (the Customer Service Aptitude Profile and the Sales Achievement Predictor) to match current employees with new roles within the organization. For example, when a new position opened up that had a heavier sales-focus, they would look back at their employees' scores to look for individuals who were "Highly Recommended" for sales roles. From there, they could share the new job opening to those current employees to see if they were interested in the opportunity. The results from those initial tests continued to provide value post-hire as a tool for internal recruitment, job matching, and cross-training.

"We've found that people don't necessarily know what job they're interested in," McConnell said, "but if you can lead them to a role that their tests show they qualify for, then often they see the opportunity and think 'oh that would be perfect for me!'"

Incept has used Criteria's testing platform, HireSelect®, for nearly a decade. The assessments have not only led to better quality of hire over time but also has saved them precious recruitment hours, making the hiring process more efficient along the way.

Incept is a conversational marketing firm that specializes in creating productive conversations that drive meaningful results. As a multi-channel contact center, Incept's staff of customer service professionals communicates with customers through everything from inbound and outbound communications to text and chat services. Founded in 1993 and based in Canton Ohio, Incept has relentlessly focused on building a company culture that supports their clients and helps employees reach their goals. Their award-winning work culture has earned them the distinction of being a Top Workplace in Northeast Ohio seven times.