A credit union in the western US wanted to improve its quality-of-hire for Teller positions, which accounted for the majority of its annual hiring.

There was a strong, statistically significant correlation (.42) between CBST score and employee performance for the 61 tellers for whom performance data was available. Those who achieved the highest scores on the test were much more likely to be rated as good performers by company management, as detailed in the table below:

Table 1: CBST as a Predictor of Teller Performance at Credit Union 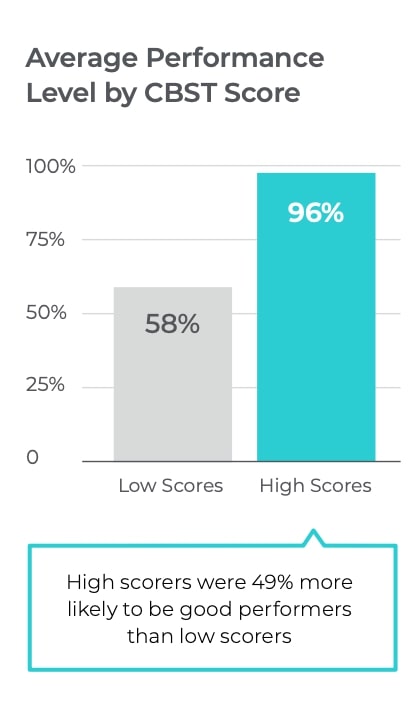 Specifically, 22 of the 38 tellers in the lower-scoring group on the CBST received overall ratings of 3.0 or better, while 22 of the 23 tellers in the high-scoring group were rated at least as "good" performers (3.0+). As a group, the high scorers on the test scored 0.7 of a standard deviation higher than the low scorers.

The difference in average performance levels by test scores is displayed graphically in the chart above.

By giving preference to candidates who received the highest scores on the CBST, the credit union was able to substantially improve its overall quality of hire, leading to improvements in productivity and a reduction in turnover.