A leading Internet domain registrar and web hosting company wanted to increase the productivity of sales staff at its call centers. As part of this initiative, the company decided to experiment with more data-driven hiring practices. Specifically, the company set out to determine if administering a sales personality test to candidates as a pre-hire screening tool would lead to increased sales for its sales consultants.

The company administered the Sales Achievement Predictor (SalesAP), a personality test that measures traits that are critical to success in sales roles, to a large sample of its current sales consultants (n=158). Scores on the test were then compared to sales productivity, as measured by a Revenue-Per-Day (RPD) metric tracked by the company. Each employee who took the test received one of three possible scores: "Highly Recommended," "Recommended," or "Not Recommended" for sales. 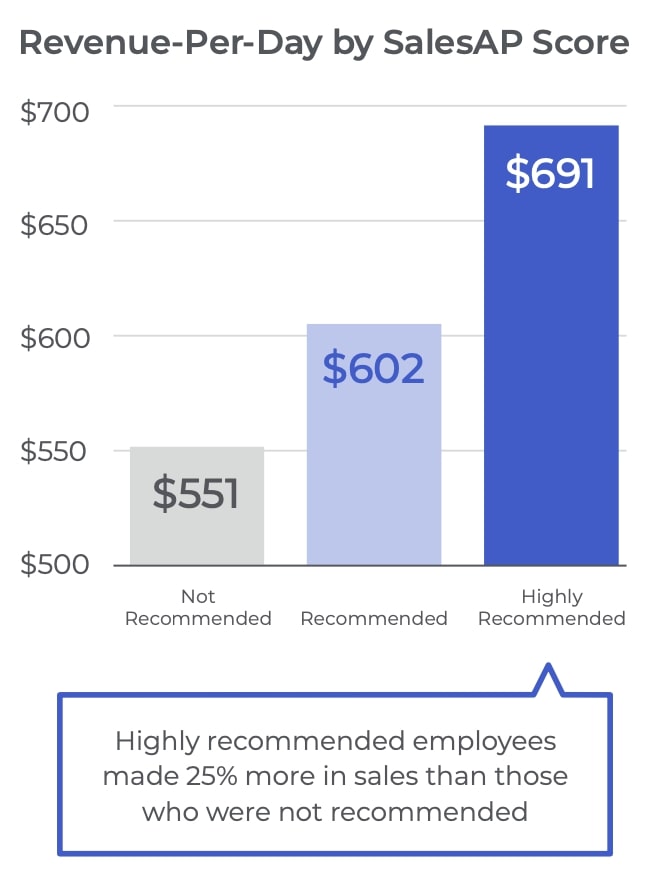 The SalesAP was a powerful predictor of success for sales consultants at the company. Overall, the employees' SalesAP scores were significantly correlated with their revenue-per-day (r=0.22, p < 0.01). Employees who received a "Recommended" rating on the SalesAP generated 9% more revenue than those who were "Not Recommended," and the employees who scored "Highly Recommended" on the test averaged 25% more than those who were not recommended by the test.