As an inbound call center, ASK was no stranger to high turnover. The company regularly hired 10 to 20 new employees per week to fill their open positions for customer service representatives. On top of meeting the challenges associated with high-volume hiring, they were also struggling to find high-quality candidates who were a good fit.

According to Dee Cook, ASK's Director of Human Resources, ASK used to go through a temporary agency to fill their roles. In this process, they "had to probably interview 35 to 40 people to hire 15, of which 11 might actually show up to the first day of work."

The time spent interviewing candidates was made worse by the lack of high-quality candidates. "The interviews were not good," Cook said. "The quality was not good. Not to the expectation of what we're looking for."

ASK had already decided that they wanted to do direct hire instead of going through a temporary agency. In making this transition, they needed a simple way to identify high-potential applicants to invite to the interview stage.

After speaking to another call center that used Criteria's pre-employment tests to evaluate candidates, ASK decided to take a leap and partner with Criteria. They started to administer a combination of assessments to all incoming candidates to help them prioritize which candidates they should invite to the interview stage. The assessments included the Criteria Basic Skills Test (CBST), a test that assesses job-readiness and trainability; the Employee Personality Profile (EPP), a general personality inventory; and a Typing Test.

ASK compared their turnover both before and after incorporating pre-employment tests into their hiring process. In the 15-week period before testing, when ASK was still using a temporary agency to fill their positions, they hired 172 people and lost 127 of those people within that same period. This represented a 74% turnover rate for new hires.

In the 15-week period after they began to use direct hire with the help of pre-employment tests, ASK hired another 172 people and lost just 52 of them in that period. This represented a 30% turnover rate for new hires. Before and after implementing testing, ASK's turnover rate experienced a drop in a whopping 44% percentage points, or a percentage reduction of 59%. 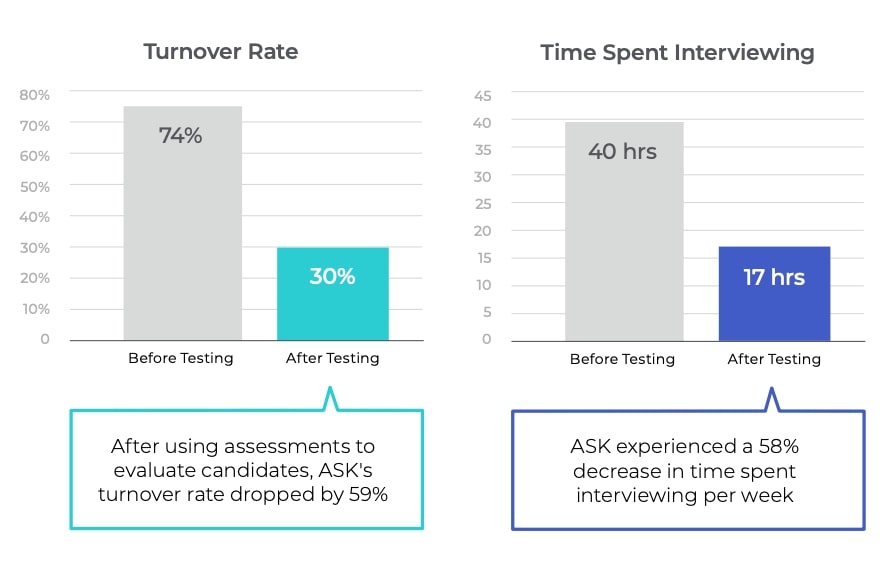 Because ASK started to use pre-employment testing as a way to qualify applicants for an interview, the company ended up saving countless hours of interview time each week. Before using pre-employment tests, Cook estimated that she and her colleague interviewed 40 people per week for 30 minutes each in order to hire 15 people. This added up to 40 hours of recruiting time per week, between her and her colleague.

After ASK started to administer pre-employment tests to applicants at the start of the application process, Cook only has to interview about 17 candidates on average to hire 15 people per week. This sums up to 17 hours per week of total recruiting time for her and her colleague. In other words, the assessments helped ASK save 23 hours of recruiting time per week in the interview stage alone. Extended to an entire year, testing could help ASK save about 1,200 hours of interview time annually.

Pre-employment testing also helped to dramatically raise the bar for ASK's quality of hire. Managers and supervisors across the entire organization noticed the difference. Their quality control team would listen in on the calls and remark that "the difference is night and day." To Dee Cook, "when you hear that from outside sources in our quality team, that's huge. I can't say enough good things about it."

The tangible improvements in quality of hire also didn't go unnoticed by ASK's clients. According to Cook, "We had a client come into the office who hadn't visited in two years. And he stopped me and asked, ‘Are you responsible for the agents that are working here? The difference is immense from what I saw when I was here two years ago.' So not only do we see it, but our clients see it."

ASK is an inbound customer care center based in Montgomery, Alabama. Founded in 1992, ASK's goal is to provide exceptional customer service based on the values of Southern hospitality.