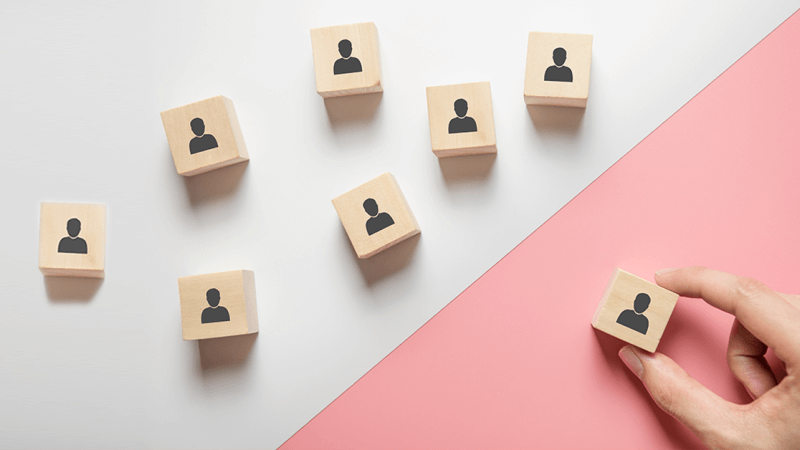 A scientific paper on selecting staff has been published recently which provides new insights on the best way to identify top performers. Researchers led by Professor Paul Sackett, from the University of Minnesota, have aggregated and re-analyzed the data from hundreds of prior studies on predicting job performance. Their meta-analysis incorporates results from tens of thousands of people working in, or applying for, over 500 different jobs. The size and scope of their analysis helps cut through the noise of individual studies to provide reliable estimates of the predictive power, or validity, of a wide range of selection methods.

What conclusions can we draw from this new study?

In many ways, the results are consistent with the last large-scale meta-analysis on this topic, a now-classic paper published by Professors Frank Schmidt and John Hunter in 1998. Across both studies, the methods with the highest validities are those that directly assess the knowledge, skills and abilities required to do the job in a structured and consistent manner. The most predictive methods from the latest study are:

What’s changed according to this study?

The new study includes tests of EI in its rankings, reflecting increased interest in EI testing over the past 20 years. While not in the top five most predictive methods, the results show that EI tests are meaningfully related to job performance. This is especially true in jobs that involve high levels of emotional labor. These kinds of jobs require employees to display particular emotions (e.g., happiness) and also to process or respond appropriately to the emotions of others. Two examples are customer service positions and health care roles.

The study also highlights the relationships between assessment method scores and race. In the United States, where the current study drew almost all of its data from, White candidates routinely get higher scores in selection processes compared to Black or African American candidates. The gap is largest for cognitive ability tests, work samples, and job knowledge tests. Personality assessments had the least adverse impact against Black or African American candidates. This new study gives a high level of prominence to these findings, reflecting the importance of reducing adverse impact in selection. The findings support using multiple methods when selecting staff to maximize predictive validity while minimizing adverse impact.

Finally, it turns out that our best methods of predicting job performance are probably not as good as we thought they were. Looking just at the top five methods shown above, the new paper finds validities that are about 25% lower than those reported in previous research. I go into the reasons for this in more detail below. But briefly, it looks like the previous estimates of validity were erroneously high. The true validities of the selection methods have not changed over time, but we are now estimating validity more accurately, and more conservatively, than before.

Where do these estimates of validity come from?

Industrial and Organizational (IO) Psychologists are constantly conducting research studies on employee selection methods. Additionally, organizations sometimes make their archival data available to researchers for analysis. Researchers then compare the scores people get on one or more selection methods with ratings of their actual job performance.

Over the years, IO Psychologists have conducted hundreds of these studies. Around the 1980s scientists started to combine the results of these studies to make general conclusions about which selection methods were the best overall. These combined studies are called meta-analyses. The new paper produced by Professor Sackett and his colleagues is the latest in a line of meta-analyses. It uses the most comprehensive set of prior studies available, and also makes advances in the statistical methods used to draw conclusions from these aggregated studies.

Why have estimates of validity decreased in the new study?

The new validity estimates are lower in each case where we have comparable data. The reasons for this decrease are varied, but the biggest overall contributor is that prior studies were too liberal in the way that they corrected for an issue known as range restriction.

To explore this in more detail, consider the scatterplot below. This plot shows 100 people, with their scores on a selection test (out of 100) plotted on the X axis, and their job performance ratings (out of 10) on the Y axis. As can be seen, higher test scores tend to be associated with better performance ratings. The correlation depicted here is 0.45, indicating a very high level of predictive power. 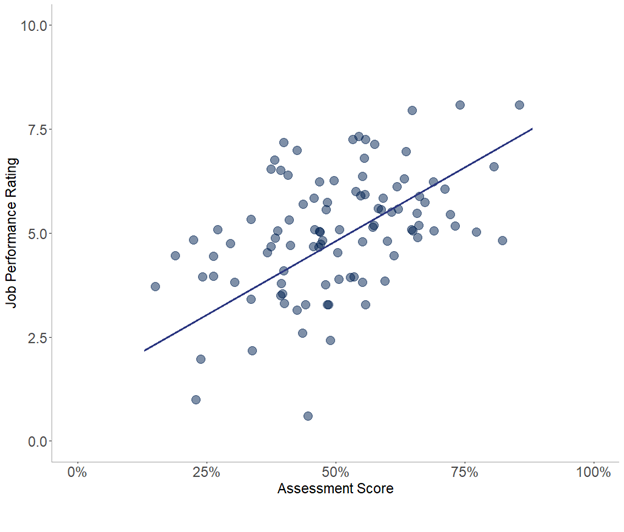 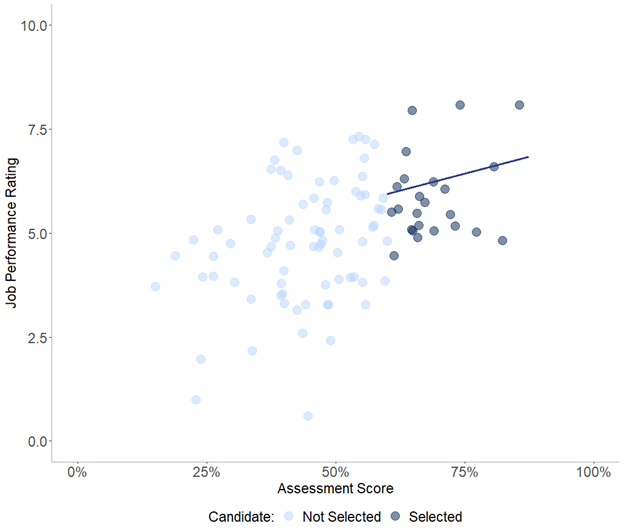 When you’re just looking at the people who “passed” the selection test, the relationship between test scores and job performance ratings doesn’t look that great. In this figure, the correlation between job performance and test scores for the dark blue points is 0.25. This is actually a useful level of validity, but nowhere near as strong as the “true” correlation of 0.45. In effect, the correlation you observe underestimates the validity of the test because it does not reflect how many poor performers you avoid. This issue is called range restriction, because it’s caused by a failure to observe the job performance for the full range of test scores.

Fortunately, not all studies investigating the validity of selection methods are significantly affected by range restriction. In some studies, all incumbents are assessed on the test, and so job performance scores are available for everyone, regardless of how well they scored on the test. In other studies, there is some range restriction, but it’s not nearly as severe as the example shown above.

When looking at all the studies, you can see that the more the range is restricted, the lower the correlation between assessment scores and job performance becomes. We can describe this relationship mathematically in a formula that links the degree of range restriction to the observed correlation. When researchers conduct a validity study, they mathematically adjust the observed correlation to reflect what it would have been if there was no range restriction. This adjustment allows us to get a better estimate of the true relationship between assessment scores and job performance.

Dr. Matthew Neale
Dr. Matthew Neale is Criteria's VP of Assessment Products. Matt leads Criteria’s professional team of organizational psychologists and assessment software developers to deliver innovative psychometric assessments that give client organizations genuine insight into their current and potential talent. Matt is a member of the Society of Industrial and Organizational Psychologists (SIOP) and plays a strong role in advancing the science of Psychology through collaboration with academics and practicing IOs worldwide.